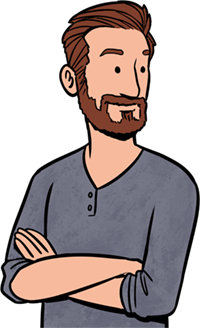 Developer:
Hedgefield
Based in 's-Hertogenbosch, Netherlands

Hedgefield is a narrative-driven game developer focused on making (2D) adventure games, comics and illustrations that tell memorable stories, and maybe help you understand the world a little bit better.

Tim started his career making small games in Adventure Game Studio. Sufficiently convinced game were where it was at he decided to go to game design school at the HKU in Hilversum, Netherlands. During his time there he worked on some more games, like 15 Minutes, The Jelly Reef and his graduation project Trusted Soil. Upon graduating he started working with Adriaan De Jongh and Bojan Endrovski at Game Oven, classmates and friends of his, doing the visual design for their first game Fingle. After that he got a job as game designer at Paladin Studios, working on Momonga Pinball Adventures, health game LAKA, and the official Looking For Group RPG.

After a while he missed the freedom of working on his own projects, and decided to go freelance. During that time he did a lot of illustration and design work for various clients, including Game Oven's third game Bounden, and Hubbub's Free Birds. In the meantime he started building out his personal game portfolio with Black Feather Forest, Reconquista and Last Voyage of the Orlova.

There are far more images available for Hedgefield, but these are the ones we felt would be most useful to you. If you have specific requests, please do contact us!

presskit() by Rami Ismail (Vlambeer) - also thanks to these fine folks